An open source app for the 'Gentse Feesten' 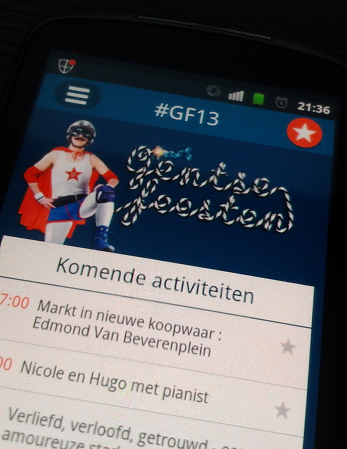 Every year, my hometown Ghent, hosts its annual festival called the Gentse Feesten. 10 days - actually, 11, if you count the unofficial pre-friday day - the city will barely sleep.

One of the hardest things is to actually figure out where you want to go during one of these days. There is the official website and there (was) also an available, but we decided, for several reasons, to write our own, open sourced and native application. The data is grabbed and available at http://data.gent.be. Open data and open source, a perfect match.

After a couple of brainstorms and iterations on the design, we released the first versions so you can start planning your events and have them available at any time.

You can install the Android version from Google Play.

In case you have an Android device, the program will be downloaded in the background on the first start. On iOS, you can start browsing immediately.

The code is freely available on GitHub, so anyone can easily send bug reports, interface translations or create pull requests to make the applications even better. The services are currently our own, so you need to setup those yourself first. Note that there are also some implementation differences between the platforms.

So, who will make the Windows mobile (done!) and Firefox (Done too!) version ?

Maybe an idea for the next one - use phonegap/Cordova and have it for blackberry/windows/... with roughly the same effort?

Though about that, but we figured that native is the way to go because my experience with phonegap is not a good one.

Haven't tested Cordova yet, that's for this summer :)

Love the speed and responsiveness (certainly when compared to the official app).

Only reason I haven't deleted the official app is because of the "cash dispensers" and "bicycle parkings" point-of-interest, something to add for next year? ;)

We're still trying to get that in in two weeks though :)

If I have time i'll have a look into a windows phone app.

And I use Xamarin for cross-platorm stuff.

In case you want the designs and all slices we used, just sent me mail!

An open source app for the 'Gentse Feesten' 2013-06-25T09:48:18+02:00
Have you written a response to this? Let me know the URL by sending a webmention.
Topics
android
mobile phone
iphone
festival